We analyzed 4 million data points to see what makes it to the front page of Reddit. Here’s what we learned.

Look at any viral stories on news outlets like CNN.

Look at any viral images going around on BuzzFeed.

… the breeding ground for all these viral stories often is Reddit.

“Reddit Scraping” is a common practice by news agencies to figure out which stories will be the most popular on their own websites. 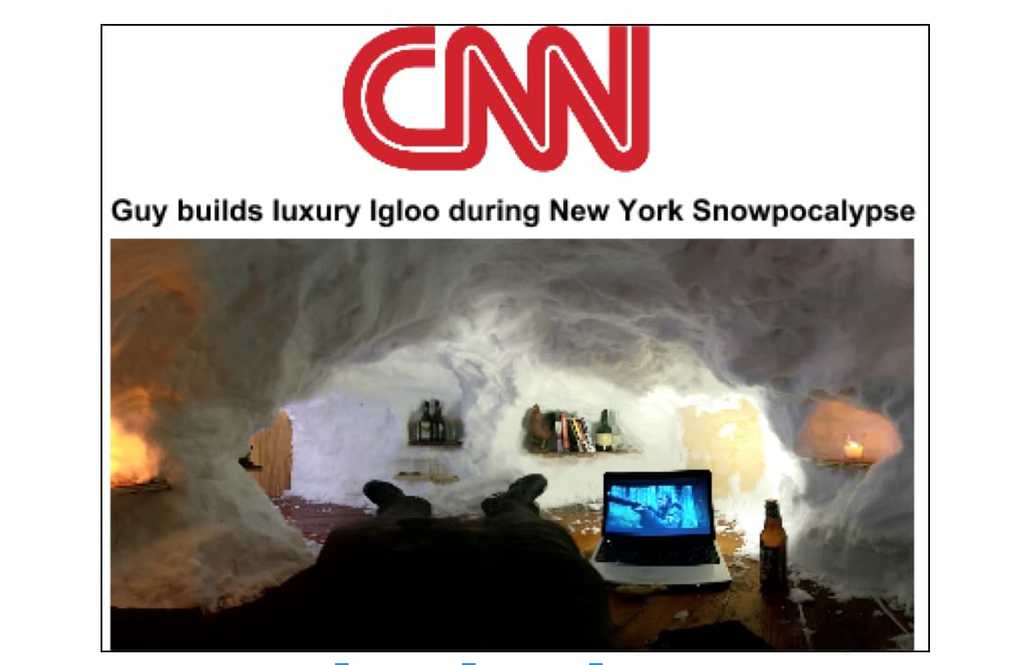 “Reddit Scraping” is such a common practice now because several thousand random people already UPVOTED these images proving the story is “viral”.

This is why if something hits the front page of Reddit, you can expect to see it popping up on news sources and social media within hours (if not faster).

For example, let’s look at the front page of Reddit and make it into a “Viral Story” and re-adapt it into articles for different sites:

As soon as something hits the front page, media outlets from around the world feature these posts. For example, a Reddit front page giraffe story got on CNN.com homepage in 2 hours.

Our Reddit Scraping Process to get 4 million+ data points :

We noticed that the results on the first page were changing very quickly, and set out to scrape the rankings every two minutes. We started on December 16, 2015 and continued up until January 8, 2016.

This resulted in the following data:

Stats for the top 100 posts on the reddit page:

We found 2,344 unique posts appearing on the front page in the three-week period - this is about 106 different posts per day all getting in and out of the front page!

There is quite a bit of action in the Reddit's top 100!

Here is what we THOUGHT we would see:

Before we got the Reddit's data we thought that the number of comments drives the upvotes of Reddit posts and causes them to appear on the front page. And yet - posts with a small number of comments can often get super high scores and appear in the top 25 of all subreddits, and this does not only happen with images!

Reddit is also notorious in letting negative and cynical posts thrive - maybe due to the main demographic. We wanted to check whether it is actually true, or just an impression because the eye might simply be noticing negative statements better.

These interesting observations were made (and validated) exclusively based on the data. Here is what we discovered:

FINDING #1: Starting at 9am PST is the fastest time for getting upvotes

If we look at the average evolution of upvotes over a day, we see that the scores on the front page are growing significantly starting from 9am morning PST, reaching the stable peak between 5pm and 9pm PST. 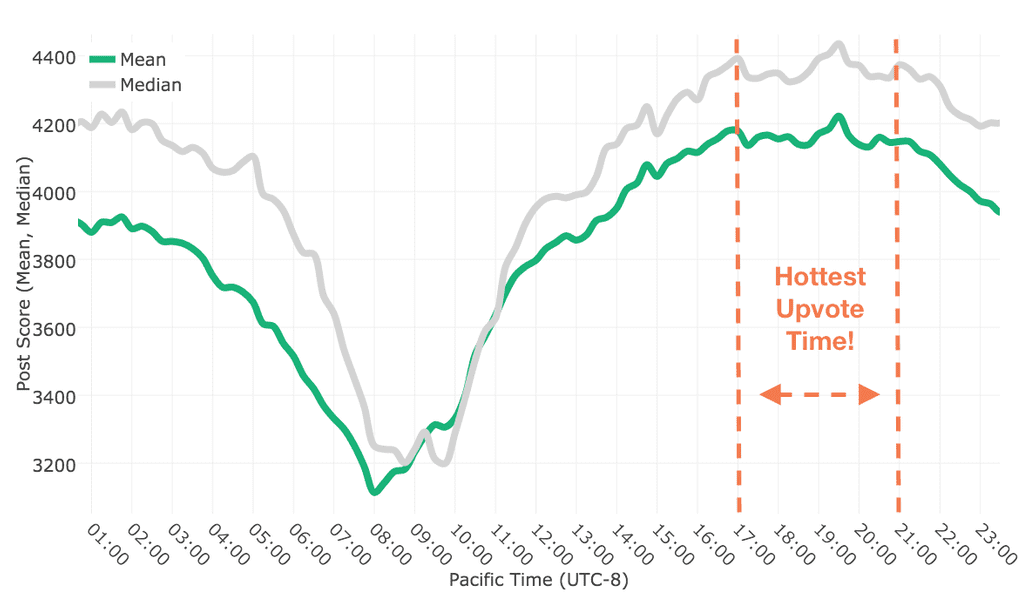 In general, there is no relationship between the sentiment, or how positive, negative, or neutral the headline of the post itself is and it's popularity. However, if we look at the Reddit's own textual posts (no images), then among them all polar post headlines (positive or negative) perform significantly better than the neutral ones. 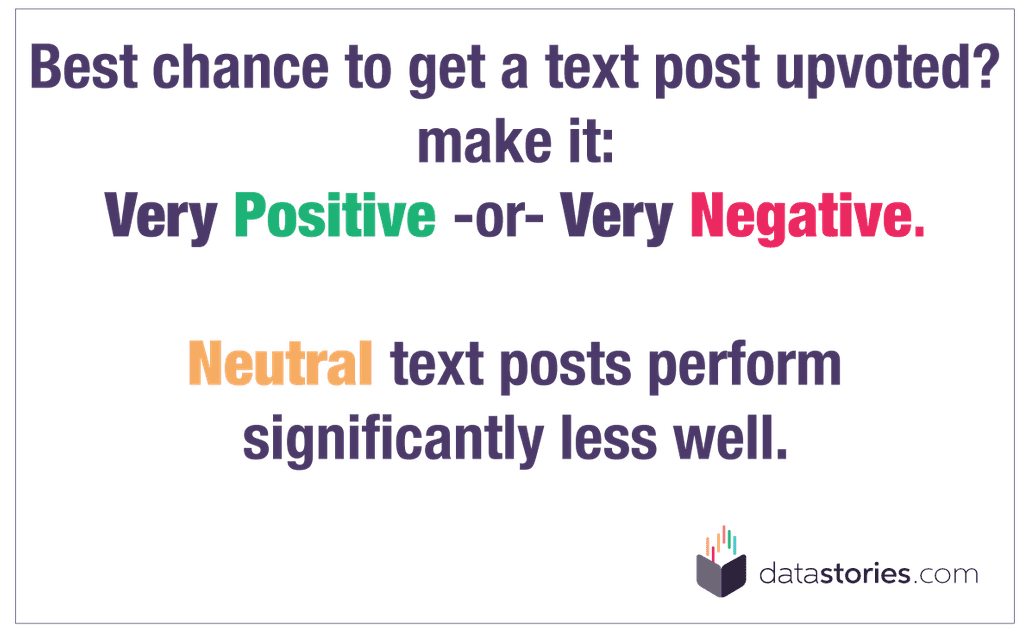 FINDING #4: Images get much more upvotes than text posts.

Images are definitely performing much better than textual posts in terms of the maximal scores, while the textual posts get significantly more comments.

FINDING #5: However….text posts get more comments and stay on the front page longer

Even though image post on average get more upvotes…..text posts tend to get much more comments and stay on the front page longer.

This is probably a text post can cause more of a conversation than an image post usually can.For example, the image post below is a cute picture of a dog cuddling a baby… which attracted a massive 4,804 upvotes, but only a measly 301 comments.

The text post however got only 1622 upvotes, and a massive 3,449 comments… because the post inherently lends itself to lively conversation. 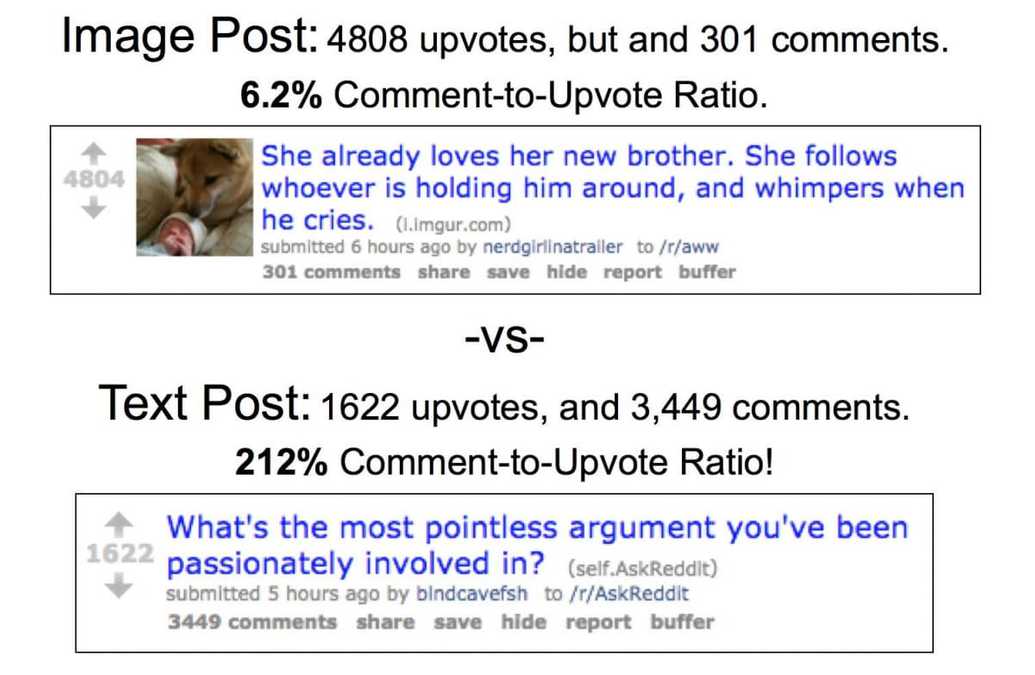 FINDING #6: There are 5 Sub-Reddits that completely dominate the front page of Reddit.

Subreddits r/funny, r/pics, r/gifs, r/TodayILearned, r/gaming dominate the Reddit's front page. Posts from these subreddits get bigger scores, higher ranks, and are most frequently present in the top 25 of Reddit. 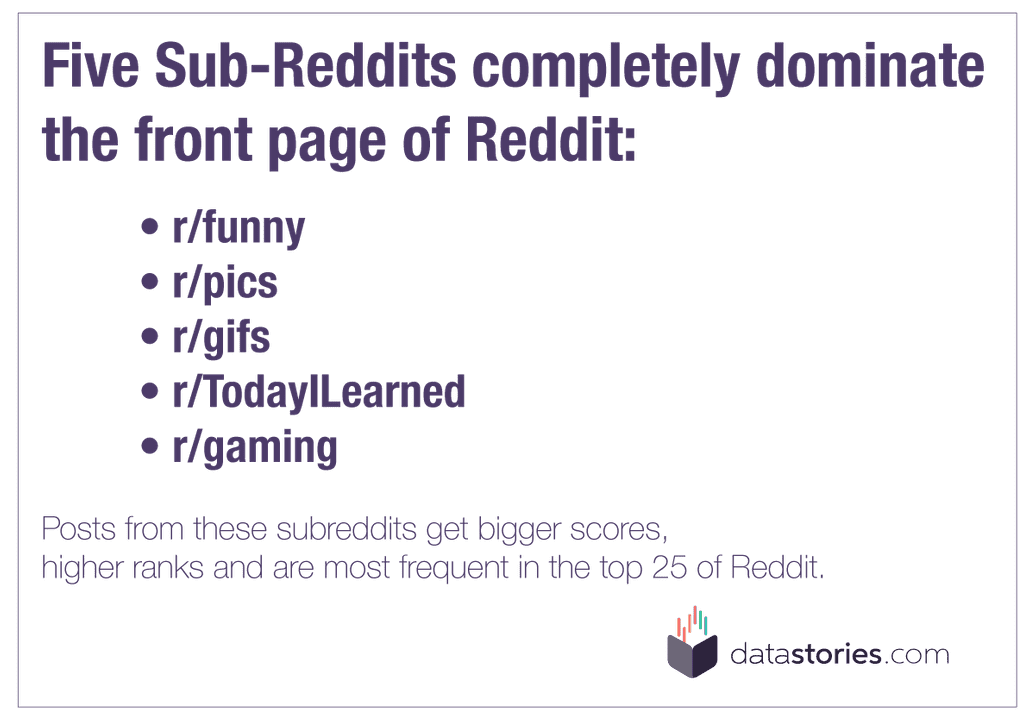 FINDING #7: The average life of a post on Reddit's front page is 4 hours and 15 minutes.

The average life of a post on the Reddit's front page is 4 hours and 15 minutes. Some posts disappear after 15 minutes, some live for as long as 18 hours. Interestingly, textual self-posts with a positive headline live on the front page significantly longer than the ones with a neural or even negative headline. It pays off to have a positive headline, even if your post is negative in content.

FINDING #8: The average scores of Reddit's posts labeled as 18+ are significantly higher at night. Hmm...why would this be? ;-) 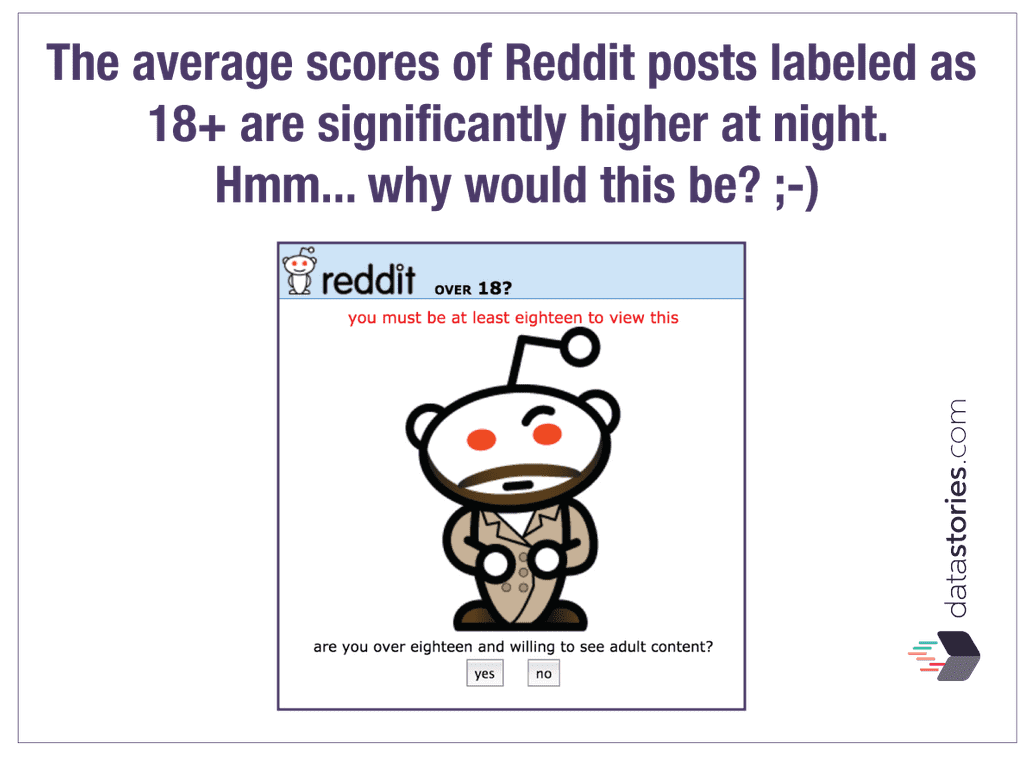 FINDING #9: Putting a number in your headline increases chances of being among the top posts.

There are a lot more posts with numbers in the headline among the top posts. These posts are also getting slightly higher scores (the difference is statistically significant) than the posts without any numbers is the headline. 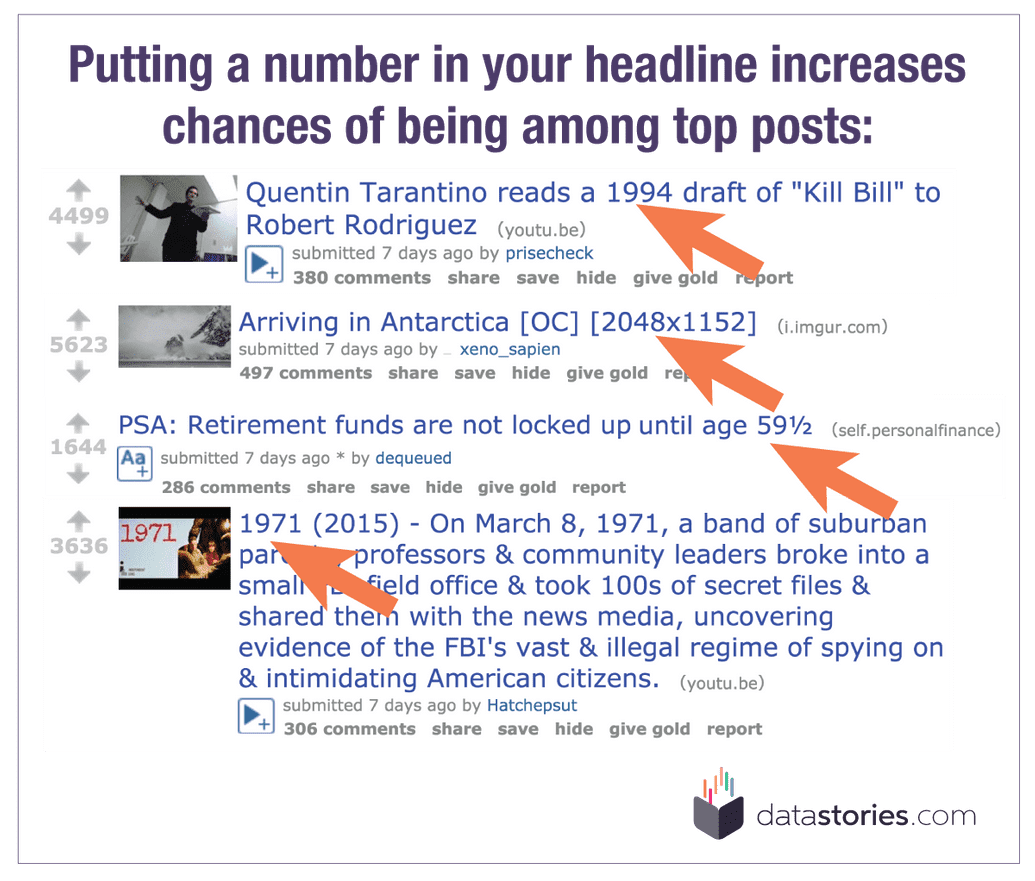 FINDING #10: The number of comments of posts on the front page are 5.5 times higher than of posts in the top 100 on average.

Not only are posts on the front page ranked much higher, but they are actually 8 times higher in medians than the other posts in the top 100. 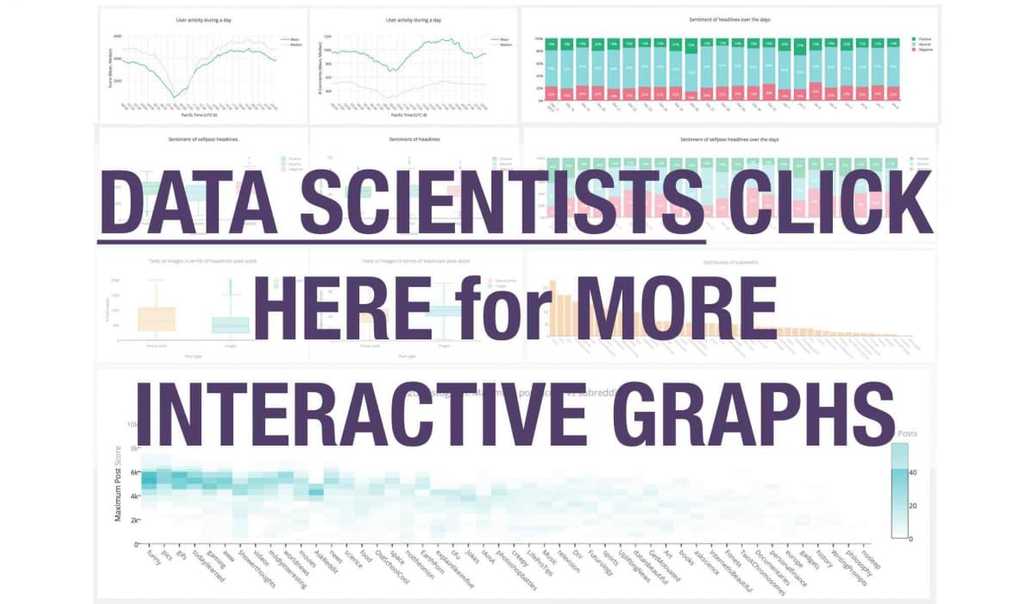 HOW IMPORTANT ARE SUB-REDDITS?

EXAMPLE: A funny picture of a guy getting in the face with a water balloon would go on the sub-reddit r/funny.

ANOTHER EXAMPLE: A gif post about David Beckham kicking a really cool soccer shot would go under r/sports.

Some of the superpopular sub-Reddits are:

But what's interesting is that posts from small subreddits still have a chance to appear on the Reddit's front page, and frequently make it to the front page.

This means if you’re trying to get to the Reddit front page, you don’t have to only post in super-popular sub-Reddits.

So we watched the top rated posts on the frontpage of Reddit for 22 days and kept tracking data on multiple things:

We mean... who DOESN’T want to know how to get on Reddit's first page?

Reddit pre selects the top 50 subreddits to pull their best performing posts on it's front page. We looked at how frequently the posts from each subreddit get into top 25 and got interesting stats:

HOVER over the graph to see a the most viewed Sub-Reddits:

For the secret Geeks in the audience…

You'll be happy to know the sub-reddit /r/science is fourth most popular subreddit if we look at the top 100, but in the top 25 (front page posts) it really falls down to the 14-th place among the 48 default subs sending posts to the front page.

Should You write Negative or Positive or Neutral Posts?:

We thought only negative stuff would work on Reddit (that’s the reputation it gets), but the truth is Reddit is not that bad at all!

The posts are mostly neutral in all Sub-Reddits.

We looked at sentiment distributions of the top 2,344 front page posts per Sub-Reddit.

The most positive Sub-Reddits were:

The most neutral Sub-Reddits were:

The most negative Sub-Reddits were:

HOVER over the graph for MORE INFO:

How long does it take to get to the front page of Reddit?

It turns out, that on average the posts life on the front page for 4 hours and 15 minutes:

The time to get to the front page varies among posts:

This graph shows how long Front Page posts stay on the front page. For example: 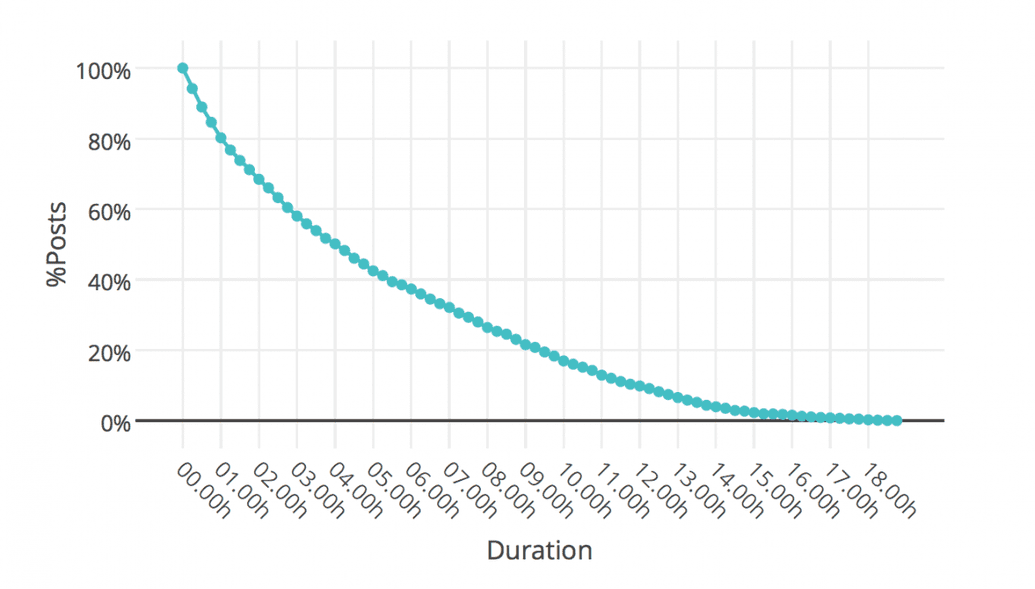 In almost every case, no posts live on the front page for over 19 hours. This is why Reddit is so addictive, there’s always new content!

Some other interesting facts about staying on the front page of Reddit:

If you want to hear about when DataStories puts out a new article, signup your email address at the bottom of the page!

P.S. We’d love if you shared this article with colleagues or friends who would find it interesting.