Investments in European Startups: A data scientist’s point of view

The data for European investments has been collected by Omar Mohout from Sirris. Since the beginning of 2016 every major investment of greater than 0.75 million Euro ends up in thedataset to watch the million-dollar club companies and their neighbors.

The data spans 32 countries, 410 cities, and 2,458 companies with a total of 2,744 investment deals. The deals vary from 750,000 Euro to 2.1 billion Euro (to fintech technology company Nets in Denmark that went IPO in Sep 2016 at Nasdaq Copenhagen). Every deal is labeled with 24 descriptors – including company, founding year, type of business, investment type (round), technology, industry, VC, etc. The purpose of this study was to look at the current state of investments in Europe and draw independentdata-driven conclusions from it, and compare how well they correspond with the “common sense” or “urban legends” about the best countries, cities, technologies, and industries to have a startup in.

dataStories Int. is a Belgian high-tech startup focused ondata analytics and artificial intelligence, also we happen to have a CEO who is a woman. This primed our specific interest toward AI, data analytics, and SaaS tech, and to impacts of CEO genders to funding, and well as the overall funding climate and trends for Belgium where we are based and surrounding countries. This made us quite curious about the results.

Sirris is the collective center for and by the technological industry. We offer Belgian companies three key assets to help them remain innovative: years of experience and comprehensive expertise in a wide range of industries; high-tech testing infrastructure spread across the country; and an extensive network of partners.

1. [Deal size distribution:] One-million euro club and their neighbors usually get up to 13.5 Euro, with a median1 investment size of 2.5M Euro. “Black swans” get between 13.5M and 2.1B, but they constitute only 12% of the data (all rounds from Seed to IPO are present in this category).

Let’s take a closer look at sizes of investment deals and how they are distributed. The biggest deal of 2.1B Euro is 3,500 times bigger (yes, three and a half thousand times) bigger than the 35 smallest deals of 750,000 Euro in seed capital. Exactly 50% of all investments from our data set is below 2.5M Euro, and 75% investments is below 6.2M Euro.

In fact, an investment of 13.5M Euro in our data is a statistically defined threshold beyond which all deals are considered as “outliers”– they are uniquely different from the rest.

Because they are fundamentally different than the prototypical deals in our data, we decided to consider them separately. This way they will not badly influence conclusions about the most common deals.

With all “disproportionally” big deals put away in a different category for separate exploration, we’ve got 2,410 investments left, all under 13.5M. We call them Medium Deals.

1 Here and almost everywhere in the text we report a median rather than an average size of the investment. Median of a list of numbers is a center point of their values. It is more robust representation of the values in the sequence and less sensitive towards the outliers. E.g. while an average investment among 2M, 2M, 2M, and 10M is 8M, the median is 2M –it represents our values better.

Finding 2: [Top cities] The top four cities in terms of the number of investments as well as the total amount spent are London, Paris, Berlin, and Stockholm (yes, in this order).

Note, that the top 4 cities are really standing out and have considerably higher amounts invested relative to anybody else. Barcelona is on the 5th place, but the total amount is 4x lower than in Stockholm (4th place).

Insert: Brussels and Gent appear in the top 20 cities by the # investments and the total amount invested.

If only medium deals are considered, the ranking based on the total amount invested per city does not change, but based on the number of investments Paris jumps over London with its 310 medium deals vs. London’s 297. In both cases (with and without big deals) this is a tight competition. This leads us the next finding.

Finding 3: Paris happens to second most active city after London in terms of the number of investments and the total sum, but not in terms of a median deal size (avg. deal size).

[Optional]: We can show top 5 deals for Paris and London.

In the Figure below (it is interactive) we plot the monthly number of deals per city for the top 5 cities as circles. The size of the circle corresponds to the median deal size. E.g. in January 2016 the median deal size for London and Paris was 5.3M and 2.8M Euro respectively. Note, that while the red circles of Paris are generally higher (more investments per month) than London, they are much smaller (lower deal size).

Finding 4: University cities seem to be a fertile ground for successful backed startups

It’s interesting that all top 20 cities by the number of investments as well as the total amount invested are university cities (not necessarily with a big population). [see top 20 above]

**Finding 5: FinTech is the top industry in terms of the number of investments (324 deals, 13.1% of total) as well as the total sum invested (6.4B out of which 5.15B went into 61 very big deals, and a total of 1.25B into 276 medium deals). We cannot state that there is a growing trend for FinTech. The median deal size in 2017 is comparable with the first 6 months of 2016. Some experts hypothesize Fintech is overvalued and we need to expect an increasing number of exits soon

In the Figure below we plot the investment counts per month for the top 5 industries (by the number of investments). The leaders are FinTech, HealthTech, MAdTech (Marketing and Advertising Technology), eCommerce, and PropTech (Property Technology).

In the figure below we show the top industries by the total amount of Euro spent (sorted by the number of investments – from left to right).

Finding 6: The top technologies by the number of investments remain to be AI, SaaS, App, data Analytics and Connected Hardware. AI investments demonstrate a strong growing trend (no sign of stabilization), SaaS investments are decreasing in numbers, but increasing in the avg deal size.

data Analytics is quite stable: 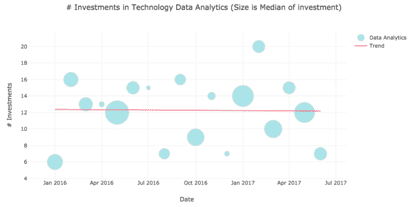 And here are the top 10 in terms of money invested in 2016-2017 (VR, Connected Hardware, Autonomous Vehicles, and IoT lead the way):

**Finding 7: European Investments are distributed according to a power law with a coefficient 1.95 (the fraction of startups getting X euro funding is proportional to x

Power law distributions often arise from preferential attachment phenomena, and in economics this manifests as “rich get richer”. We modeled a distribution and it turns to have a power coefficient of 1.95 (very close to the magic number of 2 for venture economics, see Power Laws in Venture article(3)). Power law comes up for the frequency of backlinks in websites, population of large cities, frequency of used words, revenue growth of Fortune 500 companies in years 2 to 5, as well as unicorn valuations.

Finding 8: There is no correlation between the amount raised in an investment deal and any of the company descriptors except a non-linear correlation of 40% with the number of employees at the point of funding (bigger companies get more money).

This was surprising – there is even no correlation between the round name and the deal size. 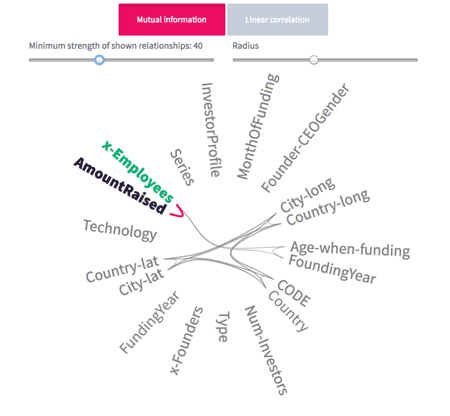 Finding 9: The deals in 2017 got bigger (statistically speaking) than the deals of the first 6 months of 2016.

For all investments considered together we observe that the first 6 months of 2017 have the median deal size of 2.7M, while 2016 had 2.3M Euro4.

Finding 10: The role of CEO gender in investment size.

Our data had a very interesting attribute – a gender of the company’s CEO at point of funding. Needless to say, we were curious to check how things are going for women-led startups.

First of all, the ground truth so far is that there are much less women CEOs. This is confirmed by the Sirris data. Out of 2,546 investments with the known gender of the CEO, women-led startups constituted 10.7% of the total (246 investments vs. 2,300 for men-led startups). This does not show much improvement relative the previously reported large-scale study by TechCrunch, stating that 12% of global venture rounds went with startups with at least one woman founder. However, one looks at it – companies might need more women founders and more women CEOs.

We were mostly interested in looking at investment size of deals for women vs. men-led scaleups and discovered something surprising. For all European investments (in our data) of 2016 there was no statistically significant difference in the median deal size for companies with a men or woman CEO. (Guess what – the median for women-led CEO is a lower, but it is not statistically significant. )This means that it is so small that a truly different distribution of deal sizes cannot be established. The median deal size for men in 2016 was 2.3M, while for women-led companies 2.2M.

The average deal sizes in 2016 are severely impacted by “outliers”, that’s why it would not be fair to compare the averages. So, for 2016 out of 812 investments the avg deal size was 8.5M (while the median 2M), and out of 87 investments into companies with a woman CEO the average deal size was 10.4M, yay! (while the median is 2.2M). We already have seen that the deal size in 2017 has increased relative to 2016. With respect to men- and women-led companies, it seems to have increased only for men-led companies.

We do establish a strong statistically significant difference in the fundings in 2017 – men-led companies do get bigger deals. The picture stays the same whether all data, or only medium deals are considered.

Let’s hope that the second part of 2017 will set the records straight and align the funding size among leader genders as it was in 2016.

Interactive plot for # investments or deal size per country: