The question is: "Can we find out what's the perfect post recipe based on the data from marketing & blogging giants?"

The answer is as always right in the data! We did quite a bit of analysis with thisdata and created something cool for you to play with. Here is a structure of this fat and juicy post:

Here is a summary of our findings:

Blogs by the Numbers

We wanted to call this post: "Stand on the shoulders of marketing giants" for a reason. Six blogs have given us a list of 2,381 posts with whopping stats:

People who write this goodness are machines! Many of us wonder how to get large following - we're afraid there are few shortcuts.

Here is a zoomed version for all posts with up to 500 TWEETS. Each dot is a carefully crafted story!

There is a lot of controversy about the ideal post length, day to post or ideal headline length. Let's look at our 6 blogs and see whether there are common patterns in their choices.

All possible headline lengths have been tried. Headlines with 40-65 words have high fraction of super-tweets:

In a zoomed version we see that different blogs have different preferences and the high-popularity range of headline lengths is quite wide.

Word count varies from blog to blog. Backlinko, OkDork, IWT like long and super-long posts of more than 2000 words:

Socialtriggers prefers posts with less than 1000 words, while Quicksprout has specific preferences for either short 250-300 word posts or 1000-2000 words:

Let's look at posting evolution for all giants over time

For up to date information we only selected the posts published since January 2014 and did the analysis of main blog metrics on quarterly basis. Normally calculating average values per quarter would depend on the "outliers", e.g. posts which went viral. That's why we also did the robust stability analysis which led to same conclusions. If you want to see the results - contact us.

Look at the differences in posting frequency per quarter since 2014. OkDork has been getting quieter since Q3 2014. Quicksprout outputs 35-40 posts per quarter. Ramit Sethi has been ramping up his output significantly since Jan 2015.

Average FACEBOOK SHARES per POST are quite different among the blogs. We clearly see that social sharing is not everyone's focus and there are good reasons for that. Note the backlinko, for whom we've got data since Q2 2015 has a quickly growing trend in avg shares per post:

Note, that we did not have a complete information for Q3 2015 which is just over, and that's why we don't plot the metrics for other blogs except backlinko. The amazing thing about backlinko is that we only 29 posts in our dataset the blog has very impressive social sharing metrics. If shares are the goal, and time is tight Brian Dean from backlinko might have a process which falls into the growth hacking category.

[Note, Backlinko is in operation since July 2012. Thanks, Jascha Brinkmann for pointing this out. We've only got and analysed post data visible on backlinko.com/blog.]

Average TWITTER SHARES per POST show similar trends. Note, that Q3 2015 might have incomplete information. Can you guess which blogs have social shares as their target metrics?

Average HEADLINE LENGTH per POST quite similar for all blogs - something between 40 and 60 characters is a golden range:

Average WORD COUNT per POST differs a lot. Socialtriggers have been ramping it up. Backlinko started writing super-long posts.

Weekday to post to get shares ranges significantly among blogs. The only general conclusion is to not post on weekend.

We analysed the data with respect to specific patterns in the weekday of posting and social shares. If all 2,831 posts are considered as one pile - the results are inconclusive.

PLAY with the GRAPH below to see how twitter shares and weekdays are related. CLICK on the legend to skip or select blogs of interest.

For individual blogs the only reliable observations we can make are the following:

Headline properties like length and neutrality have been appearing as the driving variables in predicting social shares and number of comments on several occasions. You can find the details below. Two main conclusions here:

We were curious ourselves to see which words are usually present in successful headlines, and made this little tool to explore the headlines further.

We also looked at all posts as a whole - 2931 post in total, and applied our text analytics routines to see whether any particular clusters of posts will emerge.

We named the resulting segments A,B,C,D,E,F and calculated the average stats for them. The results are interesting!

The table below shows most representative words for each post segment:

Note, that while for most blogs the social shares increase towards segments E and F, Quicksprout does very well in segment B. Cluster C (represented by words card, calculator, credit, ultimate, banner, otherwise, guide, comment, blog, update, free, get, new, save, money) is entirely monopolised by Ramit Sethi from IWT. 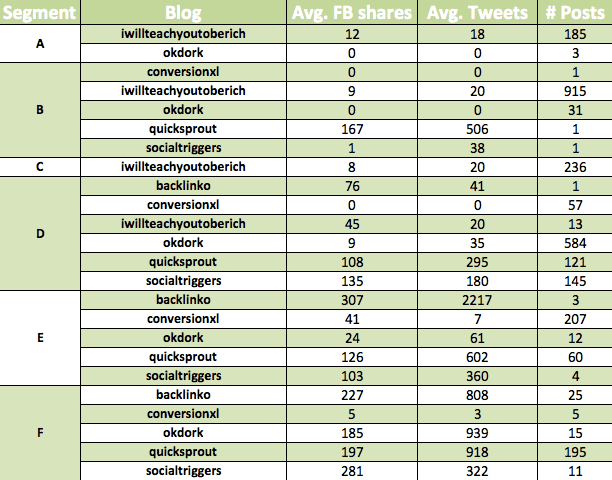 We ran each individual blog data throughdataStories to understand which blog metrics impact social shares. In all cases models of sufficient accuracy could be created, and in all cases the metric drivers are different:

At last we've tried to train a large deep learning model to see which words from the content of all individual blogs are used in the same context.

Note, these are no synonyms, but similar words used in the same context. Under the table you can check which fraction of the posts per blog uses the word you typed, and how many times in total the word is used.

As we mentioned above being neutral does not help to get social shares and here is the proof. In the tables below we look at the average and median share counts for posts having particular combinations of sensitivity scores.

Posts with NEUTRAL headline & NEUTRAL content get shared the WORST, while with POSITIVE headline & content - the BEST of all posts!

It pays off to be positive in headlines and content.

Look at the average social shares per post neutrality. HOVER over the graph for more info:

Voila! The data clearly demonstrates that neutrality in your language reduces the chance for your posts to be read and shared. Express an opinion and show personality. Facebook values both extremes of polarity. Twitter rewards being positive.

If you want to evaluate the sentiment of your drafts, check it here.

We’ve analyze all the data, and here are the end conclusions: